The Junior League of Evansville is pleased to announce the annual Meg Dettwiler Scholarship application process is now open.

If you have questions regarding the Meg Dettwiler Memorial Scholarship, please call the Junior League of Evansville office at 812-434-6710.

Meg Dettwiler: Her Legacy Lives On 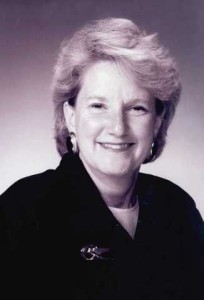 Meg Dettwiler, a leading League leader in the Junior League of Evansville and one of the YWCA’s 100 Women of Evansville. Photo credit: Evansville Courier & Press.

In August of 1999, the Junior League of Evansville lost one of its most devoted sustainers after a two-year battle with cancer. Meg Dettwiler joined the JLE in 1979. Though she had a demanding career in marketing, she was a dedicated JLE member, serving our League’s Board and Executive Committee during seven of her nine active years.

As a sustainer, she continued to support the League by cheerfully contributing to our fundraisers and by serving as a patient and enthusiastic advisor to many active members. Everyone appreciated her inspiration and encouragement.

Meg’s participation in the Junior League was just the beginning of a rich history of voluntarism in our area. She was best known for being a strong supporter of University of Evansville athletics. She also supported and served on the boards of many not-for-profit organizations, including Easter Seals, Evansville ARC, the Boys and Girls Club, Mesker Park Zoo, the Rotary Club, the Evansville Philharmonic Orchestra, and the YWCA. She continued volunteering through her illness.

Meg received the City of Evansville’s Athena Award in 1996 and our League’s Helen Klamer Philp Award in 1998 for her tremendous community involvement.

Following Meg’s death, JLE was informed that Meg had remembered the League in her last will and testament, and had bequeathed a donation to be used at our discretion. After careful consideration, a decision was made to establish an annual scholarship program in her name. It is our desire to keep alive the spirit of giving that was a central focus of Meg and her life by rewarding individuals with a similar focus. Overwhelming financial support from Meg’s family and her JLE friends grew the scholarship fund, and the first set of award winners was announced in the spring of 2003. It is our hope that the legacy of this tireless volunteer will live on through this memorial program that will forever bear her name.